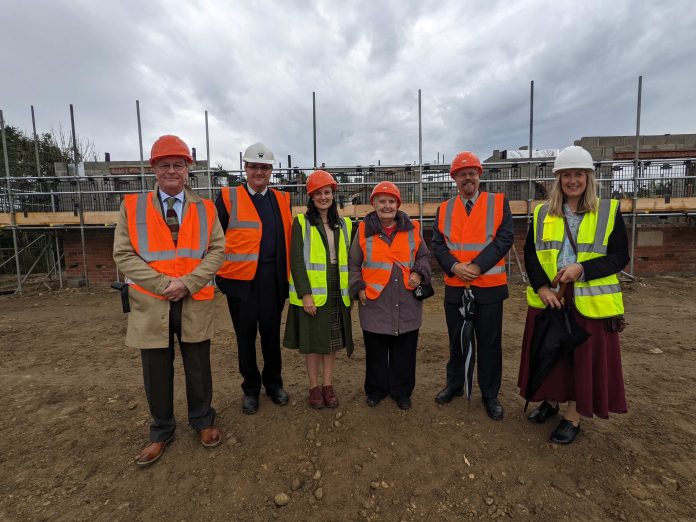 Work is underway at Beamish, The Living Museum of the North on a replica of aged miners’ homes that will provide a space for people living with dementia and other long-term health conditions.

Dedication stones have been unveiled on the replicas of the aged miners’ homes from Marsden Road, in South Shields, which are being built in the museum’s 1950s Town, as part of the Remaking Beamish project.

Beamish is working with Durham Aged Mineworkers’ Homes Association (DAMHA), which owns the original houses, and also with residents and community groups to gather stories and memories of 1950s life.

Two of the four aged miners’ homes will show Beamish visitors what life was like for retired miners in the 1950s. The other half of the terrace will provide a space for the award-winning work of Beamish’s Health and Wellbeing Team. The team runs a range of groups and sessions, including for people living with dementia, those experiencing mental health issues, social isolation or long-term health issues. Activities run by the team include men’s groups, dementia-friendly music sessions, walking groups and creative sessions inspired by the museum’s collections.

Michelle Kindleysides, Beamish’s Head of Health and Wellbeing, said: “The aged miners’ homes will mean we can support more people and do so many more activities, with more groups and people with a wider range of health needs.

“It’s fantastic to be unveiling the dedication stones for the aged miners’ homes. I feel privileged to be part of this – a huge thank you to everyone who is supporting the project.”

People who take part in Beamish’s Health and Wellbeing Team activities, currently based at Orchard Cottage at The 1940s Farm, have been helping to develop how the homes will look.

Beamish has been working closely with DAMHA and its residents on the aged miners’ homes project.

Paul Mullis, Chief Executive of DAMHA, said: “We are delighted to have been part of this project which will result in our aged miners’ bungalows in Marsden Road, South Shields, being replicated in the new 1950s Town.

“Beamish Museum has involved us throughout the process, including inviting our residents to the museum to share their experience of the 1950s and even visiting us in South Shields to help identify some of the items from that period which could furnish the homes.

“The laying of the dedication stones marks a major milestone and we are now all looking forward to visiting the homes with our residents when they are complete.”

Aged miners’ homes were some of the earliest forms of social housing to help elderly members of mining communities. DAMHA was founded in 1898 and the first Marsden Road Aged Miners’ Homes were opened in 1914. DAMHA has provided Beamish with plans, a blueprint of the homes in their original context and a photograph of the official committee.

In addition to The National Lottery Heritage Fund, the aged miners’ homes project has been supported by the Friends of Beamish and the Rothley Trust.

Earlier this year, the museum opened its 1950s terrace as part of the Remaking Beamish project. The terrace features John’s Café, Elizabeth’s Hairdresser’s, Middleton’s Quality Fish and Chips, and a recreation of the 1950s home of North East artist Norman Cornish. In May, Coronation Park and Recreation Ground opened in The 1950s Town.

The 1950s Town will also feature a cinema, toy shop, electrical shop, police houses, semi-detached houses and a bowling green and pavilion. The expansion of the museum’s Georgian Landscape includes examples of early industry including a blacksmith and pottery, a drovers’ tavern and self-catering accommodation.

The aged miners’ homes are due to open in Beamish’s 1950s Town in 2023. For more information visit, www.beamish.org.uk