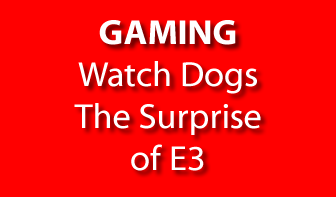 The E3 gaming conference each year is the industry’s favourite event for showing off their up and coming projects to the world audience in a bid to whet our gaming appetites coming up to the biggest sales period of the year, Christmas.  The usual suspects were out in force with Treyarch’s Call of Duty: Black Ops 2 taking centre stage to give us a sneak peak of the “Next generation of 1st person shooter” and also EA was giving us detail on the planned DLC for Battlefield 3. This is all well and good but I know myself and many other around the world are starting to tire of all the blood soaked, first person shooter games which have been released steadily since the arrival of Call of Duty 4: Modern Warfare five years ago back in 2007.

For fans of action games and shooters, a selection of games look to buck the current trends and strive to do something different with their offerings for winter 2012. Ubisoft had a great showing at E3 with both of their third person action titles looking to live up to the pre-conference hype. Assassins Creed III has once again reaffirmed the stance that the guys and girls at Ubisoft are trying to be different and innovative in comparison to the competition. Set during the American war of independence, this title looks to be worthy of the Assassins Creed name whilst also developing on the play style we all know and love.

Although Assassins Creed III looked fantastic, this wasn’t Ubisoft’s big surprise for E3. Out of the Blue Ubisoft released footage of a new title which looks to shake up the whole action genre and give us a more thoughtful and innovative playing style.  Titled Watch Dogs, this newest offering seems to give you a great mix of action, style and something different to the usual first person warfare games.  You play a hacker who can use his mobile phone to manipulate the electronic world around him. This means along with the obvious action, you have to use electronic warfare and stealth to achieve your goals.

The system used to create electronic chaos seems pretty simple and easy to use. By getting out your phone in game, every person you look at in the street have their information displayed as your phone trawls the web for any details which may come in handy for completing objectives. Along with this you can jam other mobile devices and also create havoc by hacking into the road networks to change traffic lights as you desire. This part of the game play reminds me of the Metal Gear Solid series as quick run and gun action was never the main agenda.

I can see Watch Dogs being a thinking man’s action game, giving us a new dimension over the norm which is flooding the video game market at the moment. I for one hope that this is going to be as good as it looks.  Unfortunately, Watch Dogs has been given a 2013 release date  for Xbox 360, Playstation 3 and PC by Ubisoft as it is still in development but this title has brought something new to the plate. Will it be able to stand up to the new Grand Theft Auto IV which is also planned for release at a similar time? Only time will tell, until then all we can do is wait in anticipation.