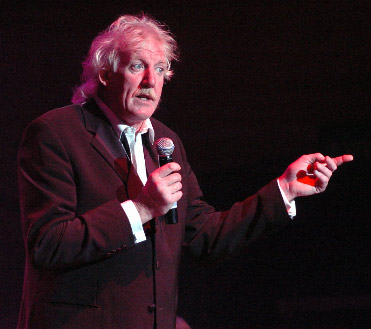 North East favourite, Brendan Healy, is taking his distinctive brand of Geordie humour on tour this autumn to theatre venues across the region in his “My Little Theatre Tour”.
An established and award-winning stand-up comedian and after-dinner speaker, Brendan will be joined on his tour by several special guests, including local rising musician, Shamelay, also known as Sam Healy.
Those who have seen Brendan perform can look forward to his signature blend of comedy, story-telling and music in this show, with plenty of new material to delight fans and new audiences alike.
Brendan started his professional career as a musician, and has enjoyed prolonged musical success which include a period in legendary band, Lindisfarne, as well as many years fronting his own band at venues throughout the North East. He has worked with Mark Knopfler, John Miles and AC/DC’s Brian Johnson amongst others, and has written over 40 signature tunes for TV.
Equally, he is no stranger to the world of acting, both on stage and screen. On television, he presented ITV’s Razzmatazz in the seventies before going on to appear in the likes of Auf Weidersehen Pet, Crocodile Shoes, Badger and Coronation Street, whilst his theatre appearances include a season in London’s West End.
More recently, Brendan has become an integral part of North East Christmas tradition with his production company’s annual pantomimes, performed at The Mill Volvo Tyne Theatre on Westgate Road, Newcastle now in their 18th year.
As a comedian and after-dinner speaker, Brendan has performed not just all over the country, but all over the world, but his first love is always to play to home audiences.
His theatre tour kicks off in Alnwick on 8th September and Consett will be his 2nd stop on Saturday 15th September.
Of playing Consett Empire Theatre, Brendan says, “The Empire is a marvellous building, steeped in local history. It began life as a variety hall, so it seems fitting that I should be bringing my own brand of variety to the venue”.  Brendan’s show will include plenty of stand-up, Geordie humour, storytelling and music from the man himself and his special guests.
Tickets are available in person from Consett Empire Theatre box office, by telephoning (01207) 218171, or by booking online from the Leisureworks website, and are priced at £17 or £16.50 for concessions.