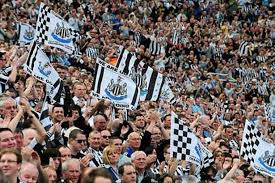 Newcastle fans know this summer is massive, if Newcastle don’t spend money they will be in big trouble next season. It’s not hard to see what Newcastle are missing and that is two top strikers, a centre midfielder to replace Yohan Cabaye and a winger. I think Newcastle fans would be very happy if they got rid of some of the fringe players like Gabriel Obertan, Romain Amalfitano and Sylvain Marveaux and the brought in four players that would go straight into the first team.

Jack Colback will be a free agent from the 1st of June, Newcastle have been heavily linked with the lad and with him having a newcastle supporting family could make this deal happen.

Remy Cabella is a player Newcastle fans would love and I can see this deal happening, Newcastle have reportedly made a bid for the frenchman but Montpellier are apparently holding out for an extra 2 million, sources close to Newcastle have said they would like to tie up a deal for the player before the world cup starts.

Clement Grenier has also been linked with the club but I don’t think this deal will happen, Lyon have been a difficult club to deal with in recent years, so thats why I think the deal won’t happen.

Wilfried Zaha is a deal that could happen if Newcastle are quick enough to agree a loan deal before other clubs come in for the talented winger.

Bafetimbi Gomis is a deal that could happen, hes a free agent from the 1st of June and the only stumbling block could be his wages.

Ayoze Perez is reportedly coming to Newcastle this summer according to reports in Spain, with Papiss Cisse, Adam Campbell and Adam Armstrong Newcastle’s only three remaining strikers Perez would be a welcome addition.

Loic Remy is attracting interest from Arsenal and Liverpool and with him wanting to play in the champions league I can’t see him joining Newcastle permanently.

Steve Sidwell is a free agent from the 1st of June, we have been linked recently with him I can’t see why a deal couldn’t be agreed, but Newcastle would face competition from other premier league clubs for his signature.

Pierre-Michel Lasogga has been linked with Newcastle in recent weeks, I don’t know much about him personally but he’s had a good season in Germany has been on loan at Hamburg this season scoring 13 goals in 20 appearances. Lasogga has 1 year left on his current deal and Hertha Berlin would be more than welcome to listen to offers rather than see him leave on a free.

Darren Bent’s name won’t go away he’s been linked with Newcastle since January but he signed for Fulham on a season long loan. I can’t see this deal happening but I would be very surprised if it did happen.

Connor Newton has signed a 4 year deal with Rotheram and he’ll be playing his trade in the championship next year with Rotherham beating Leyton Orient in the play off final to gain promotion.

Dan Gosling has signed a 4 year deal with bournemouth, Bournemouth have got a good signing hopefully with game time he’ll come good because it didn’t work for him at Newcastle.

Shola Ameobi was released by the club after spending 14 years with them, he’s been a great asset for them and I’m sure he’ll be missed by many. Shola has been linked with Hull in recent days and with European football on offer I think that could be a tempting move for him.

Luuk De Jong’s loan has expired and he will return to his club  Borussia Monchengladbach, De Jong time at Newcastle wasn’t as good as some Newcastle fans were expecting, he didn’t score in his time at Newcastle and only made 1 assist, which isn’t good enough.

Loic Remy’s loan spell has come to an end and Newcastle fans have a big job replacing him, he was the club’s top scorer last season and became a fan favourite straight away.

Davide santon has been linked with moves away from the club but the player himself has came out and said he has no intentions on leaving the club, if he was to leave I think it would take a big offer for Newcastle to sell him.

Steven Taylor is a fan favourite as his passion for the club is there for everyone to see, I can’t see this player leaving even if QPR  did come in for him.

Moussa Sissoko is a hard worker and has a lot of pace that causes teams problems, I can see why Monaco are interested in him but again I don’t think he will leave. I think Sissoko will be a big player next season for Newcastle.

Mathieu Debuchy has been linked with big clubs recently and that doesn’t surprise me in the slightest, I would like to think he will stay but if a big club comes knocking then it’s hard to keep a player of his quality. Debuchy is best mates with Yohan Cabaye and if PSG come in he won’t think twice about signing for them.