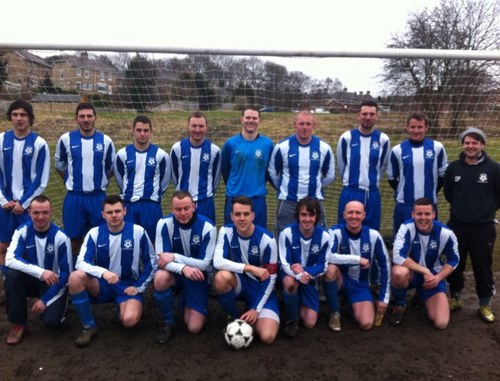 Ebchester Football Club will be celebrated their 50th birthday in August this year, following their formation in the summer of 1966. The club celebrated the event on [Saturday 5th June] for past and present members to join the annual end of season old ones versus young ones friendly – and subsequent not so active festivities at Blackhill Comrades Club.

The club, re-christened ‘Blackhill and Ebchester Football Club’ last summer, currently play in the Durham Alliance Combination League on a Saturday afternoon. This season has seen the football club re-locate to the excellent 4G facilities at Consett Academy. We’ve welcomed league opponents from across North Tyneside, County Durham, Sunderland and North Yorkshire. A fair cry from 32 clubs within Derwentside, playing by the river and changing in the scout hut on the main road.  These facilities have allowed the young team to play some great football. Having made an encouraging start to life at the new home, the club currently sit mid-table in the 18 team league, playing some entertaining and attacking football along the way – strikers Stephen Agnew and Richard Parkin netting half a century of goals between them (taking only 25 games to reach that milestone).

Although league glory currently eludes the football club, in recent years the team have proven successful across cup competitions. Particularly the Weardale Cup and Mark Blake Memorial Trophy, where the football club have reached numerous finals and won a hat-rick of League Cups (2006, 2008 and 2013).

In reaching this 50 year landmark, a great deal of credit goes to all of those involved in the club throughout the years and thanks goes to all those who have supported us in any capacity. Although there have been a number of changes over these five decades, the ethos, loyalty and enjoyment of all involved have remained the guiding principles. The current incumbents of the Manager and Chairman roles are Ken Parkin and Tim Brown who have been in their roles for over 12 and 35 years respectively, both previously playing for the club.

The current playing squad are predominantly former Consett, Blackfyne and South Moor juniors. All four of the current Players Committee have played for Ebchester for over a decade. We have players from a range of background – however the common theme is the camaraderie, enjoyment and commitment to playing good football and having a good laugh in the process that is shared throughout the squad.

The football club always welcomes new faces, as well as returning old faces. Anyone who’d like to get involved in any capacity (from playing, helping with the organisation and fundraising or simply to watch a good standard of local football) should email Ebchesterfc@outlook.com or come along to any of our home matches and join us for food afterwards at Blackhill Comrades Club.

Thanks to everyone who has been involved in this 50 year journey and we welcome all those who’d like to contribute to our next 50 years.