Beauty and the Beast is set to entertain audiences of all ages at the Empire Theatre and Cinema in Consett throughout December and tickets are now on sale.

Once again, the theatre has teamed up with North East actress and producer Leah Bell for the production, which combines the magic of a traditional pantomime with well-known pop songs guaranteed to get the audience singing along.

As well as writing and directing the show, Leah will play the loveable Mrs Penelope Potts, and will share the stage with a talented cast including comedian Finbar Healy, son of the late great North East entertainer Brendan Healy.

Finbar is well-known on the stand-up circuit and is thrilled to be making his pantomime debut in Consett as Lorenzo Lumiere. It is a performance that will be especially poignant for Finbar as his father produced the Tyne Theatre’s annual pantomime for many years.

Harriet Povey will take on the role of Belle, while James de Lauch Hay will play the Beast and Prince Rafael. 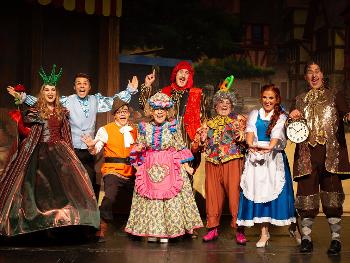 Leah, who has been producing The Empire Theatre’s pantomime for eight years, said: “Over the years I have seen the pantomime grow from a small production that was chugging along, to a much-loved and highly anticipated show with a large following.

“Like all of our pantomimes, Beauty and the Beast is aimed at children, but there is plenty to entertain grown-ups too. In fact, we often find the adults are laughing and clapping just as hard as the youngsters.”

Beauty and the Beast runs from Saturday, 1 December to Monday, 31 December. Tickets cost £16 or £14 for concessions, and a family ticket for two adults and two children costs £52.