Home Entertainment Places to Go: ROTHESAY and the ISLE OF BUTE 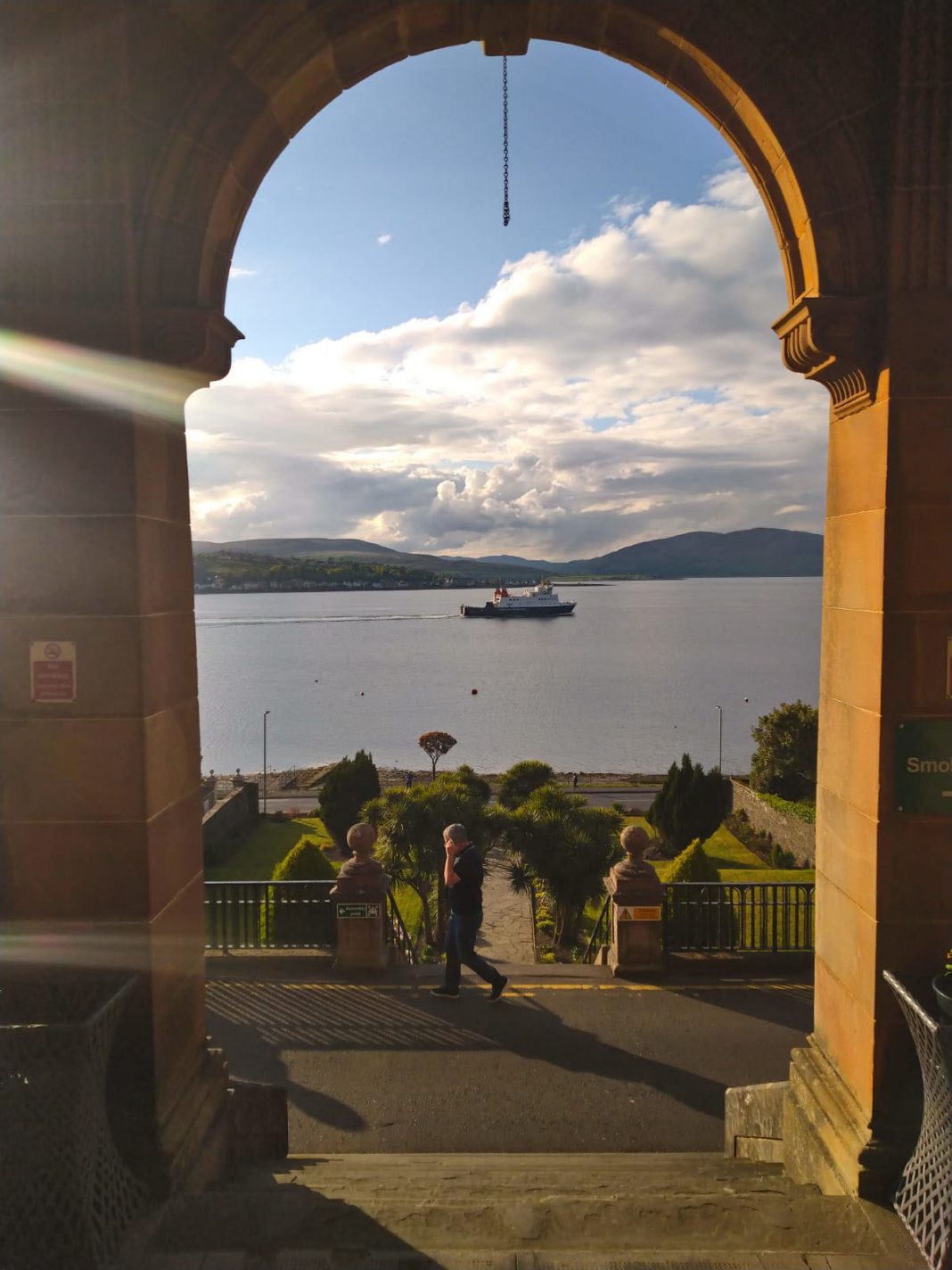 It’s 16 miles by road from Rhubodach (pronounced “Rubber Duck”) in the north to Kilchattan Bay in the south.

The Isle of Bute has no railways now, and is reached from the north east via Glasgow and then on the electric suburban line to Wemyss Bay, then ferry. A gem of a station, Wemyss Bay has a curving shape leading down to the ferry landing. Immediately opposite is the highly acclaimed Seaview restaurant by McCaskie’s who offer a delicious haggis lunch which I enjoyed during the wait between the train arriving and Caledonian MacBrayne’s ferry departing. The ferry takes 35 minutes for the crossing to Rothesay, normally provided by the two ferries “Argyle” and “Bute”. Whilst the train service is hourly, that is insufficient to take the number of vehicles which fills the ferries, so the mismatch in times allowed for a pleasant lunch in McCaskie’s.

On arrival at Rothesay, to which through tickets can be issued from north east stations, gentlemen can take a pee in the Victorian lavatories on the quay for 40p. These are a phenomenal concoction of green and black marbled stoneware, gleaming copper pipes, and white enamel cisterns with mosaic floors and decorated tiling. Built to impress in 1898, the ladies’ toilets are modern and uninteresting, so ladies are invited to have a peek into the gents. Rothesay Castle recalls a time when the Norwegians controlled Bute, and the battles between them and the Scots until the 1266 Treaty of Perth confirmed Bute as Scottish. 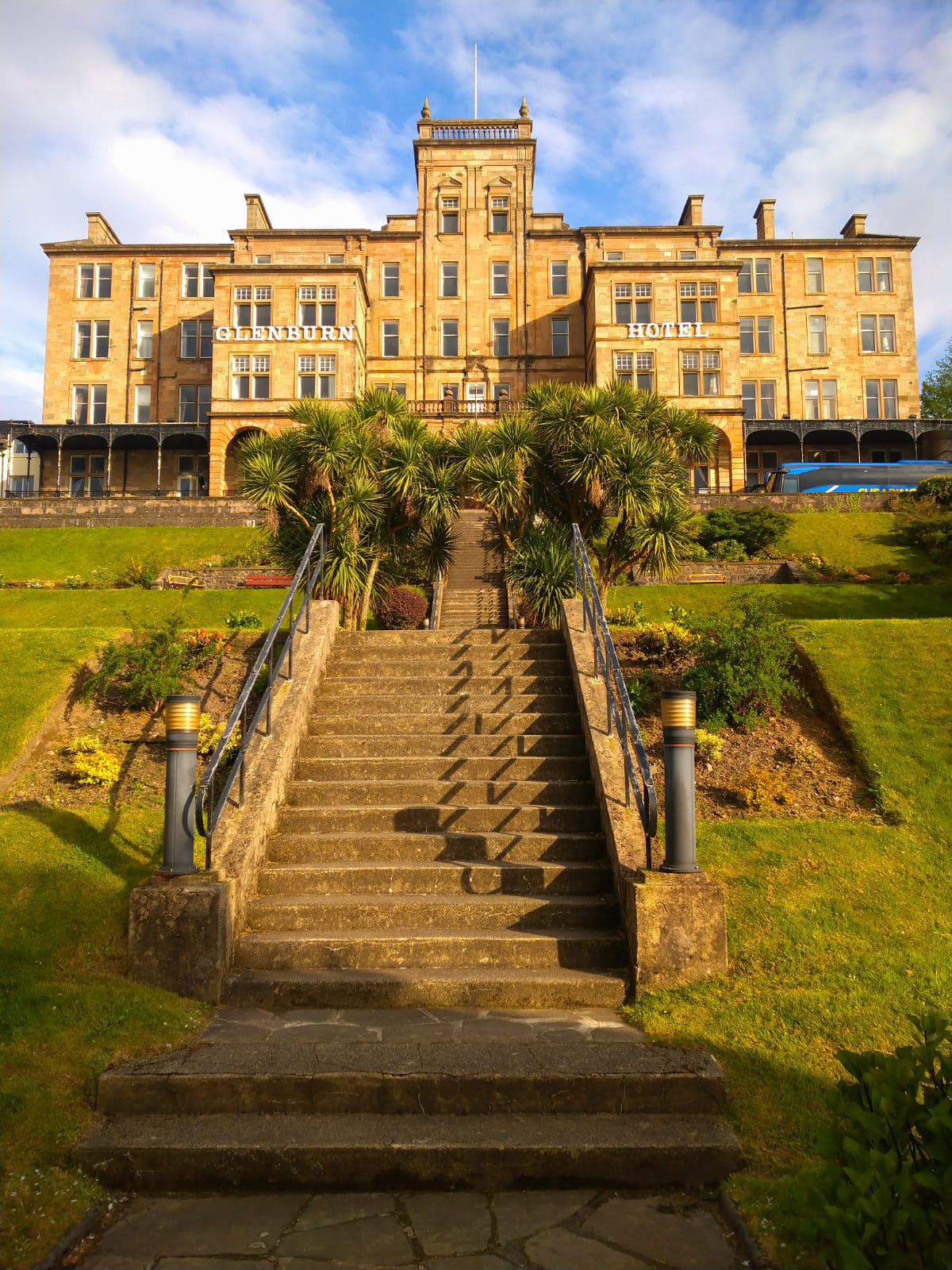 I walked to my hotel, the Glenburn, a 15 minute stroll from the ferry terminal along the sea front, where I was booked in for one night, but this is a town where a 2-3 night stay would be far better. Originally a hydropathic hotel dating from 1892, and more recently owned by Shearings, the hotel is now privately owned by a Malaysian businessman who is progressively upgrading the bedrooms and public areas. The photo shows that Shearings coaches still call. Approached from a grand set of stairs or up a roadway, the Glenburn is now welcoming and comfortable, and although parking space is restricted this need not worry those of us travelling by train. I enjoyed dinner, bed and breakfast courtesy of the hotel, and was impressed by the friendly service and the lovely view. I hoped to photograph the ferry passing offshore framed by the arch at the front door. My series of pictures as the ferry moved across was ruined by a man simultaneously moving through the foreground conversing on his mobile. 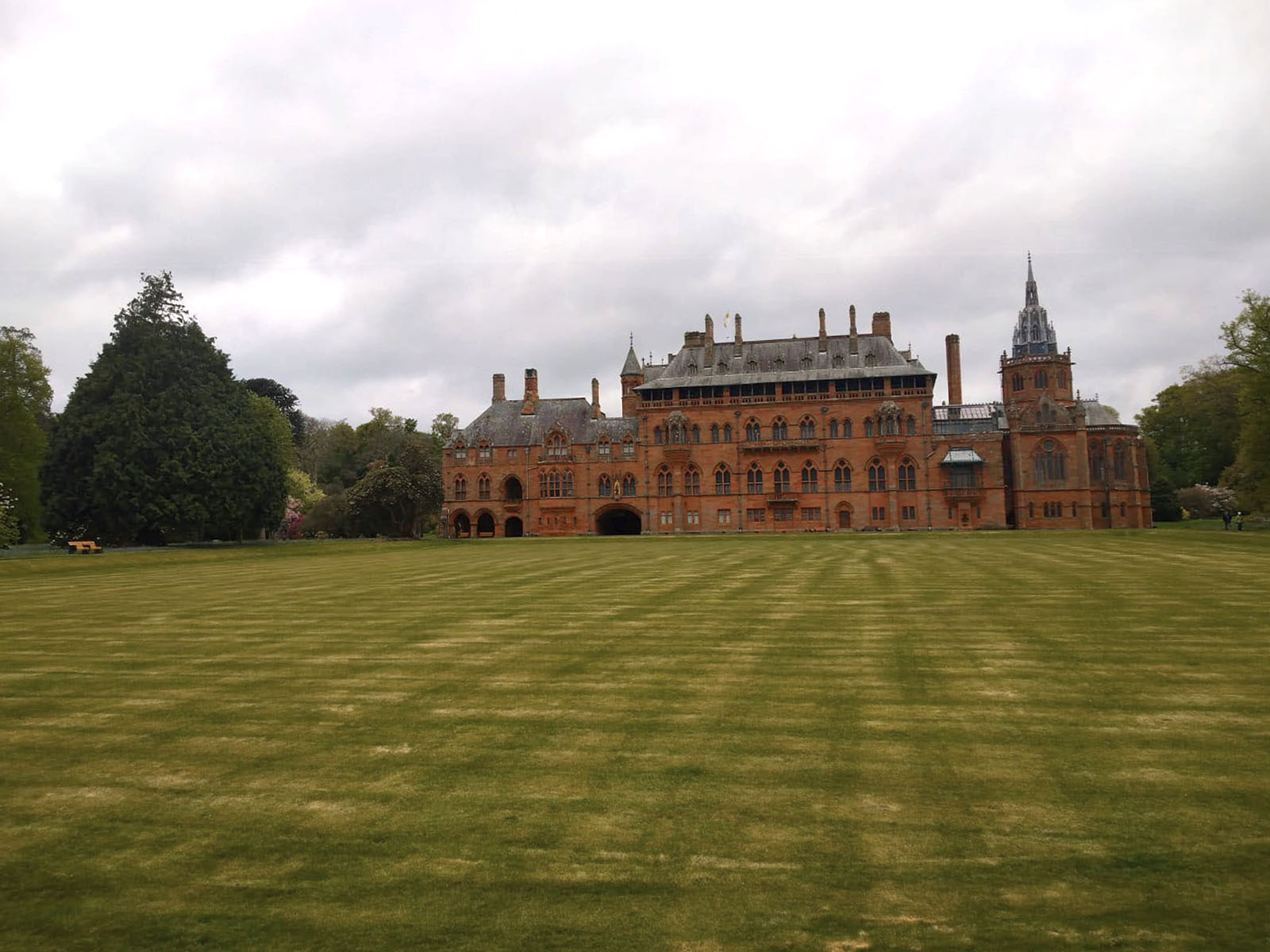 An evening trip to Ettrick Bay was enjoyable, a deserted beach with fine views to the outer islands, yet served hourly daytime by the excellent West Coast Motors (WCM). I arrived to find the café just closed, but the proprietors took pity on me and made me a take-out coffee to enjoy while I waited for the next and final bus, observing the site of Andrew Baird’s first Scottish powered flight of 1910 using an aeroplane he designed and constructed.

But the undoubted highlight of the visit was the journey on WCM bus 490 south to Mount Stuart, a stunning 1870s creation of the third Marquess of Bute, fabulously wealthy (income of £20m a year in today’s money). Gothic Revival architecture at its finest, I took many pictures of the interior of fantastic chapels, bedrooms, even toilets, on a fascinating guided tour. More time would have allowed exploration of the grounds, but 24 hours on Bute was never going to be enough.